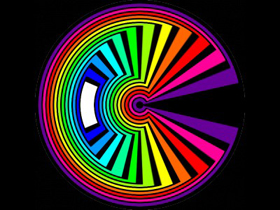 Colombian born visual artist and VJ, Maria Jamarillo, has been resident in Buenos Aires since 2009. She started her VJ career in 2005 whilst living in the UK by developing the visual sets to accompany live electronic group “2020 soundsystem’s” shows. This project allowed Maria’s work to be enjoyed on a global level with performances on main stages at major events including Creamfields (UK), Global Gathering (UK), Fort Dance (Russia), Pitch Festival (Spain), SkolBeats (Brasil),and Exit (Serbia), to name but a few!

At the same time her originality and style were quickly recognized where she was then residing in Leeds leading to her being resident visual artist at clubbing institutions Back to Basics and Asylum and Technique which led her to provide visuals for such internationally known acts as Jazzy Jeff, Skream and Benga, Hot Chip Djs, Damian Lazarus, Jamie Jones, Rob da Bank, Magda, Plump Djs, Kissy Sellout, Vicarius Bliss and Mr. Flash amongst many others(!).

Since arriving in Buenos Aires she has become a regular fixture at DJ Orange’s infamous “+160″ Drum and Bass night and is also collaborating with various Buenos Aires based projects including the  Camp&Invasion, Brandon, MSTRPLN, BuggedOut! and Sweet Noise events and IDLE pop band among many others.