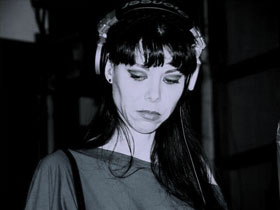 Fraulein Z is one of the few female DJ’s, who plays a stronger electro techno sound.
Her sets are characterized by a very danceable sound with very energetic pumping beats and strong bass lines. Style: Techno-electro!

She is a strong and charismatic lady and the audience is always very surprised and impressed of her sound and style. She has excellent DJ skills, and she is also the founder of the successful popular Herr Zimmerman club nights in Rotterdam, The Netherlands.

Together with her partner TanzMan, she started Herr Zimmerman in Rotterdam in October 2006. ‘Herr Zimmerman’ is the name of the alien, electronic-music minded  party cat, and is also the same name of the very creative club night!
Herr Zimmerman parties are visited by a very open minded and colorful audience from all over the Netherlands, and even from abroad.

Besides her residency at Herr Zimmerman, Fraulein Z also played in other clubs like Trouw-Amsterdam, Sugarfactory (Amsterdam), Studio 80 (Amsterdam), Club 8 (Amsterdam) and Norfolk Loods (Nieuw Beeld en Geluid, The Hague). Internationally she played together with TanzMan in Club FLEX in Vienna, OFFICINA MESSINA, ITALY, and the ZMF (Zurmoebelfabrik) in Berlin.

This year she will several Festivals, like at Rotterdam’s Music Republic Festival, CONTAINERFEST in Rotterdam, and also at DANCE VALLEY FESTIVAL 2012.
Also she is booked in Italy several times this year, among others at the ELECTRODE Festival in Rome, Italy.

Her creativity doesn’t stop here and she is now working on her first production.