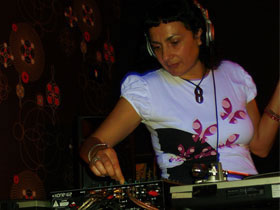 De-Monique started working as a dj since 1999 at Magazzini Generali’s aperitif. Ethnic rhythms, ambient music and electronica mixed together gave actually life to her personal soundscapes and sets. But in recent years this vision has turned into a more complex view she define “OLD SKOOL” made of hypnotic sets mainly based on techno and electro music but deep house and psichedelia as well. The aim is to conduct the audience into a pure state of mind following the rhythm of earth’s breathing and heartbeat. One night, long time ago, she was going home with her very close girlfriends after a bad party in a club. She was bored and quite disappointed and she started to think about a party all made by women. All means from the artistic concept to the technical side. After a very long “building” time, FEMALE CUT came out and De-Monique became one of the creator and one of the resident dj.