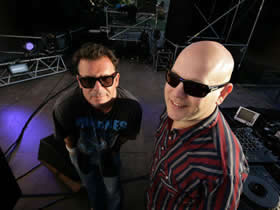 Once so eloquently described as ‘next level shit’ by Grandmaster Flash, British electronic duo Addictive TV create music with a difference; it’s music you can see.

They’re “responsible for mind-bending live entertainment” according to UK newspaper The Times, and US entertainment magazine Paste said “Addictive TV completely blew my mind! …a compelling pop- culture audio/visual avalanche!” while DJ Magazine twice voted them #1 VJs in the World alongside their Top 100 DJ Poll, saying “they’ve become famed for their eye-popping live shows, shredding and cutting film with beats into a heady, mind-meltingly funky mixture”.

In their extraordinary work, Addictive TV delve deeply into movies and videos hunting for sounds and images to sample, creating dance music that fuses everything from fidget and electro to drum ‘n’ bass and rock.

They create their music by keeping the audio and video samples together, so their fans get to see more than just a DJ, more than just graphics or visuals; they get to experience music in a genuinely unique way.

Everything from the World Cup to Star Trek gets remixed.

It’s entertainment Jim, but not as we know it!Criss-crossing the music and art worlds, Addictive TV have appeared everywhere from the Pompidou Centre in Paris and the Museum of Contemporary Arts in Shanghai, to international clubs such as Razzmatazz in Barcelona, Womb in Tokyo and Mighty in San Francisco.

They’ve now played in more than 50 countries, at events including the UK’s Glastonbury Festival, the Winter Olympics 2010 in Vancouver and the World’s largest ever silent disco, held in France in July 2011 for 10,000 clubbers all with headphones!On the directing and sound design front, Addictive TV have created commercials and video installations for the likes of Adidas, Red Bull and EA Games.

In early 2012, the guys created the launch commercial for the much anticipated Street Fighter x Tekken video game from Capcom and Namco – the first time two games publishers have ever joined forces, mashing two well known games into one.

The pair met in 2005, through EMI, working together on Mark’s album track Rapture Riders, mixing Blondie (Rapture) with The Doors (Riders on the Storm).

‘Working this way forces us to be image conscious, quite literally’ says Graham, ‘as well as being driven by the beat and melody, we’re having to think visually.

It’s absolutely like editing a movie and producing music at the same time!’Graham and Mark’s shared passion for film and music, plustheir parallel journeys through VJ and mash-up DJ cultures, have brought the guys to where they are now; entertaining audiences and winning new fans by playing and making music their own way, audiovisually.