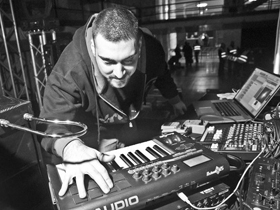 RSX is a peculiar sound, not really namable after a genre. Knowledgeable of sound’ s theory and forging tools, he researches the oddest harmonic. Lover of intricate rhythms, he layers one over another.

The result is a pretty harsh mixture of electronic phenotypes (mainly IDM and Braindance form the late 90′ s) with heavy metal structuring.

He begun sound designing for artists in 2004. He started performing live electronics in 2005 in Los Angeles. Back in rome since 2007, has kept producing and performing, while working as freelance sound engineer.