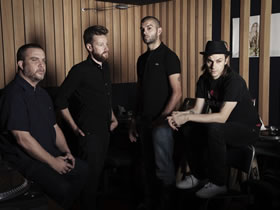 French quartet Birdy Nam Nam had already shook things up back in 2009 with A Manual For Successful Rioting : farewell, the playful and smokey abstract hip-hop heard on their first LP, and hello, heavy motorized electro beats design to cause mayhem in clubs and venues worldwide.

The massive following tour could only confirm the band’s high profile on stage : performing live, members Crazy B, Pone, Need and Lil’Mike sound and look like a punk outfit raised on Bambaataa and Daft Punk rather than the Clash and the Pistols. In 2010, BNN won a « Victoire de la musique » (the French equivalent of a Grammy award) in the electronic music category – David Guetta was also competing. Then they got back into their studio to start recording a third record. And they wanted to make something even more astonishing than their previous one. Something maybe a little less rockin and bangin, a little less obviously dance floor-oriented. Chance made that next to their studio was working Parisian producer Para One, a guy able to do techno anthems as well as digital funk jams, ambient soundtracks or future rap beats. The boys shared with him a set of common roots in hip-hop and its defining taste for wild synthesis of genres and vibes ; after a few coffee machines conversations, they all felt a collaboration could be really nice. Then three months later, the job was done : ideas were swapped and enchanced, going back and forth between the BNN lab and Para One’s unit, and the result is a rich, versatile creature, born from continuous sensitive work-out from the five artists. This is a record that has a lot to give to its listeners, and that watches everywhere without forbidding itself anything.
So the whole thing is rammed with aural details and feelings, but it never sounds messy or bric-a-brac-minded. Its tightness is almost a miracle: how could it be thought out and finished within three months and sound so solid and matured – but not mature, mind you – while blending so many different styles and atmospheres ? Maybe just because the maturation process, for these guys, has been taking place for a good ten years (and even more for veteran DJ Crazy B) : more than a decade spent absorbing with unsatiable appetite an extremely large range of music. BNN, with the help of Para One, actually updated one of the essence of hip-hop music: the hedonist will to mix very diverse references and influences coming from a vast, hyperactive environment. So this album sometimes sounds like it tells a parallel, utopia-infused story of hip-hop music, like if hip-hop hadn’t got so self-sufficient, and instead had tried mingling with R&B vocal chops, space-jazz synths, IDM digital breaks or US house and techno body-grooves. A Manual for Successful Rioting was full of straight- forward,cathartic numbers ; now Defiant Order is more into oblique, obssessive rhythms. No pretentious experiments, though: BNN are definitely not professional scientists of club music. Taking artistic and technical risks just gives them the opportunity to make their tracks even more thrilling and exhilarating.
Today’s mainstream hits produced by « edgy » names is most frequently not edgy, and simply not exciting : doesn’t it seem like the fantasy of avant-garde chart pop has vanished in recent years ? With this new LP, BNN decided to take the (almost) exact opposite way, and it’s a pretty rare thing, we have to say : here’s a globally famous band, reknown for having at first crossed-over, but that now goes back to something people used to call « the underground ». This is a radical, daring record, though it’ll painlessly reach its audience – because after all there’s no more mass-market VS underground circuits: there’s just plenty of good music here, and plenty of people to love it.