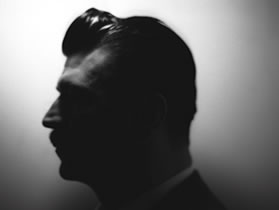 Released four years ago, the first Black Strobe album, Burn Your Own Church, took everyone by surprise with its furious feel, aggressive guitars, nods to hard rock and deliberate refusal to stay within the electro-pop limits rife at the time.

In 2007, exhausted from burning guitars on stage during the worldwide tour that accompanied the album, Arnaud Rebotini decided to hole himself up in the studio, switch off his computer and forget about the programs and plug-ins used everywhere else, sometimes to great effect, often not… He went back to all his old machines acquired over the years, the TR-808, SH-101, TR-909, TB-303, Juno 60… all instruments that have earned their place in the old school techno hall of fame.
Back then he said, “Faced with my old drum machines and keyboards again, I felt so at home, like I’d been using them all my life. Getting so much pleasure from going back to those sounds was a revelation. When you switch on a synthesiser, you’re playing an instrument that is part of music history. A laptop will always be something you use to send e-mail.”

Music Components, the album released under his own name that resulted from this redisco- very of diodes and transistors, is a pure homage to techno classics and the philosophy that accompanied them: long tracks, instrumental, repetitive, powerful and melancholic, carved out of one idea explored to the point of obsession. Ten carefully crafted tracks that prove techno has a life outside the dancefloor, in the vein of classic albums by Carl Craig, Plastikman and Drexciya (to name but a few). But above all, Music Components went totally against the grain, eschewing all the fashionable traits of the time; saturation, successive layers of sound, a mix of genres, the hybridisation of formats, malformed ideas…

After the unexpected and strangely revealing success of this concept album in the pure techno tradition, it seemed inevitable that Rebotini would pen a follow-up to Music Components. And so he has! But just as our man mutated from Zend Avesta to Aleph to Black Strobe, he’s a great fan of doing something different, always returning with new projects and carefully defined iden- tities. Don’t expect to hear Music Components Volume 2. Instead, expect a new approach, a different angle, another side of his return to machines. Someone Gave Me Religion is an album resonating from the live tour that followed Music Components, where from behind his machi- nes, Rebotini launched into his music, confronting it with the harsh reality of the dancefloor…

From the very start, track one The First Thirteen Minutes Of Love opens the album with over ten minutes of ambient unlike anything you’ve heard in years, a long, elegiac composition somewhere between Carl Craig and the chill-out zone at a bygone rave. It’s a warning: take a deep breath before being swept away by eight tracks that span Detroit and Berlin, Front 242 and Carl Craig, linking them via soaring trance, carefully-crafted minimal, the sound of the 90s, the sound of the new millennium. It’s hard to imagine the strike force and heart pangs it will inevitably inflict on any club in the know.

Nowadays, in an age where vintage is the latest fashion, ancient synths go for silly money on eBay, where the still-worshiped instrument manufacturers are concocting new machines, and where many famous producers openly criticise the creative limits of composing music on a computer, we can finally see to what extent Music Components was a record that managed to cultivate a certain nostalgia for techno’s golden years, whilst refusing to hide in the past. On the contrary, it was visionary, clearing the way for a glorious future… a future that now has a name, no matter what the time or place.